I like the idea of those little USB power banks. If your phone dies, you can plug it into one, and boom! It’s like you’ve got a whole other battery to run your device off of. Because that is, literally, what you’ve got.

I didn’t have a power bank. I usually don’t need one, since I rarely travel too far from home, on account of the world scares me. But I decided I did want to have a powerbank for emergencies. And since I’ve been doing a bit of soldering lately anyway, I decided why not make my own.

A sensible person would have, say, bought the cheapest possible cordless drill battery and used the cells from that. I am not a sensible person. Here’s my improvised power bank (which I must add, actually works, although I forgot to turn the phone’s screen on for proof): 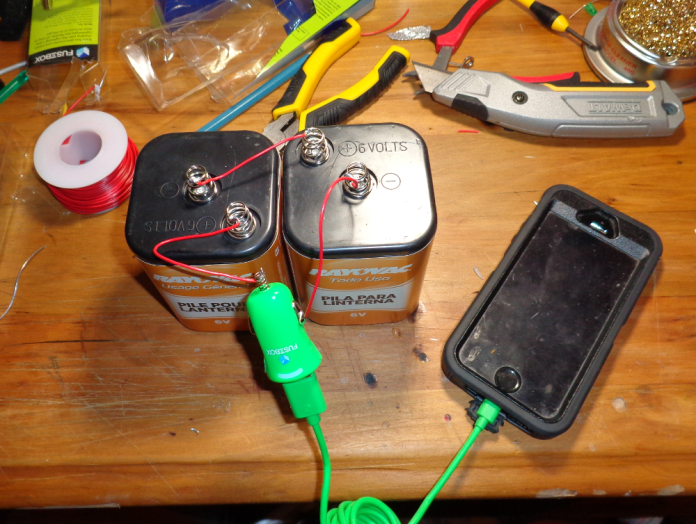 That’s what normal DIY techie people do, right? They wire two lantern batteries in parallel, solder the leads to a car cigarette lighter USB charger and plug their phone into that. Right?

These are ridiculously cheap lantern batteries. Probably zinc chloride “heavy duty” cells, which means they’ll probably leak horrible corrosive stuff as they age. But, wonder of wonders, the bastards work. A few dollars, some solder, and some throwing away of common sense, and I have a perfectly functional powerbank. It’s not rechargeable, of course, but I don’t need it to be. This is for, for instance, those times when the power goes out and I can’t charge my phone, but I really wanna keep watching Big Clive videos on YouTube, and I need a charge.

There you have it: the first (and definitely not the last) act of Sublime Curiosity Real Mad Science. I should probably punch up the name.

EDIT: Here’s the powerbank after I neatened it up with a little extra solder, too much hot glue, and a switch, so that the car adapter wouldn’t run all the time and slowly drain the batteries. 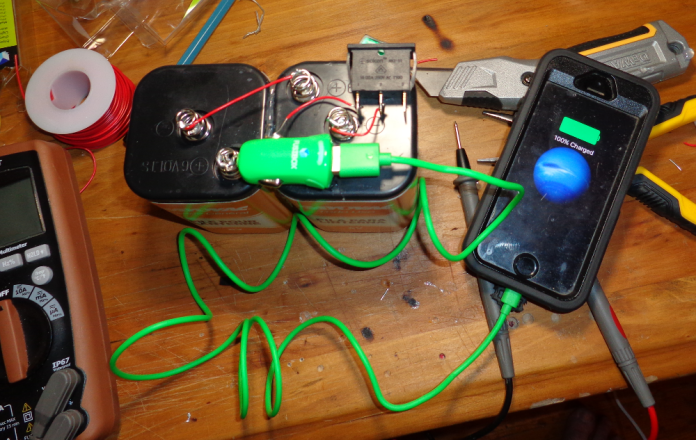 EDIT 2: I did a little poking around on the Internet, and found that, in all likelihood, each of these lantern batteries holds 11,000 millamp-hours. Since they’re in series, I’ve just gone and made myself a 11 amp-hour powerbank! From watching too much Big Clive, I know that an iPhone like mine will take 500 millamps if it can, but with these batteries, that’s something like 22 hours of continuous charging. Not bad, for $8 worth of batteries!