The metal container powered by the explosion of million-year-old liquefied algae which transports me over long distances (My car. Yes, I know I’m a smart-ass.) is a 2007 Toyota Yaris hatchback. It’s a decent enough car, I suppose. It looks about like this: 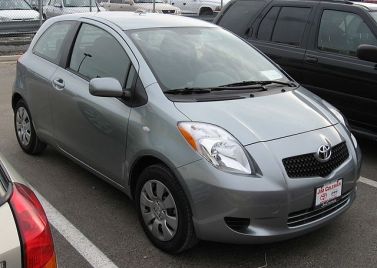 (Many thanks to the nice person on the Wikimedia Commons who put the photo in the public domain, since I lost the only good photo of my car before it got all scruffy.) According to its specifications, its engine can produce 106 horsepower (79 kilowatts), it weighs 2,326 pounds (meaning it masses 1,055 kilograms), and has a drag coefficient of 0.29 and a projected area of 1.96 square meters (I love the Internet). Those are all the numbers I need to calculate my car’s maximum theoretical speed. I’ll be doing this by equating the drag power on the car (from the formula (1/2) * (density air) * (velocity)^3 * (projected area) * (drag coefficient)) with the engine’s power. I will be slightly naughty by neglecting rolling resistance, which for my car, is usually negligible.

2. Maximum speed on Mars: (Assuming I carry my own oxygen, both for me and for the engine.) 538 MPH (866 km/h, 240.50 m/s). I would break the speed record for a wheel-driven land vehicle (Donald Campbell in the BlueBird CN7) by over 100 MPH. And probably die in a rapid and spectacular fashion. But that’d be all right: I always wanted to be buried on Mars.

4. Maximum speed underwater: This is the one we’re all here for! Water is dense shit and puts up a lot of resistance, as anyone who ever tried running in a swimming pool can attest. Maximum speed: 15 MPH (23 km/h, 6.52 m/s). Wolfram Alpha tells me I’d only be driving half as fast as Usain Bolt can run. I shall withhold judgment until we clock Mr. Bolt’s hundred-meter seafloor sprint.

5. Maximum speed in an ocean of liquid mercury: (Assuming we filled my car with gold bricks to keep it from floating to the surface. Also, why is there an ocean of liquid mercury? That’s horrible.) Maximum speed: 6 MPH (10 km/h, 2.74 m/s). I can bicycle faster than that (although not in a sea of mercury, admittedly). Of course, mercury is so heavy that, even if our sea was only 5 meters deep, the pressure at the seafloor would be high enough to make my tires implode. Which would, of course, be the least of my problems.

6. And finally, just for fun, my maximum speed in neutronium. Neutronium is what you get when a star collapses and the pressures rise so high that all its atoms’ nuclei get shoved together into one gigantic pile of protons and neutrons. It’s just about the densest stuff you can get without forming a black hole, and my car could push me through it at a whole 0.1 microns per second, which is only fifty times slower than the swimming speed of an average bacterium.

I’ve now spent far too long imagining myself being crushed by horrible pressures. I need to go lie down and imagine myself being vaporized, to balance it out.

Among the many silly things with which I like to amuse myself, Wolfram Alpha is probably in the top five. It makes ridiculous hypothetical questions (which are probably my favorite thing of all) much easier to answer. For instance:

What if I had a cubic meter of depleted uranium sitting in my yard? Well, for starters, it would weigh 19,050 kilograms, which is the mass of 12.09 Lamborghini Diablos. (I’m actually not sure which would be cooler. Probably the Lamborghinis, unless you’re the unlucky bastard who gets the 0.09.) If you divide the weight (gravity times mass) of the cube by the area of its footprint (one square meter, because I demand perfect symmetry in my uranium cubes), you get a number called “ground pressure.” When it comes to things like bicycles, cars, cranes, and horrifying mechanical spider-demons like the Bagger 288 excavator, ground pressure tells you whether the vehicle’s weight is spread over a large area or concentrated into a small area and therefore likely to fuck up somebody’s lawn. My cube’s ground pressure comes out to 187 kilopascals (27 psi), which is about the same as that of a passenger car, which means the cube’s gonna be no good for the grass.

You know what else is gonna be no good for the grass? The radiation. Oh yes, there will be radiation. I specified depleted uranium, which isn’t as nasty as the U-235 they make bombs and reactors from (well, reactor fuel; I don’t think the build the actual reactors out of uranium. That would be silly), but it’s still radioactive. It gives off alpha particles. My whole cube would emit about as much radiation as 74 grams of Cesium-137. Basically, I’m going to have another big dead spot in the lawn.

On the other hand, all that radiation releases thermal energy, energy I can use to…well…power a single LED. U-238 isn’t that radioactive, so the whole cube would only release about 0.1 Watts as alpha particles. So it’s not technically useful. And it’s actually technically an enormous quantity of a toxic heavy metal which is technically close enough to nuclear fuel that I’ll probably be getting a visit from some men with sunglasses and creepy Agent Smith earpieces. Wait, why did I want a cubic meter of depleted uranium again?

Okay. Let’s not do that. What if, instead, I had 1 trillion grains of salt? You know, there are certain foods which are common enough and uniform enough that we can use them as really weird measuring-sticks. For instance: when I think of 1 millimeter, I think of a peppercorn. When I think of 1 centimeter, I think of a blueberry. And when I think of sand-sized things, I think of grains of table salt, which in their homogenized commercial form are about 300 microns on an edge. That’s good news for us: it means I can tell you just how a big a pile my 1 trillion grains of salt will make.
Pretty big, as it turns out. The pile will be almost 3 meters (over 9 feet) high and twice as wide. I think I’m starting to realize where all these dead spots in the lawn are coming from. I’m also starting to realize that 1 trillion is a really big number. 1 trillion grains of salt would fill a standard 40-foot shipping container almost halfway. All we need now is several swimming pools to put it in, and we can have pickles forever.
What if it rained mercury instead of water? Yes, I am aware that I’m kind of copying Randall Munroe of xkcd fame here. No, I am not ashamed to admit it. xkcd is awesome.
Based on YouTube videos like this one, and the fact that mercury has a surface tension about 5 times higher than water’s, we can assume that our mercury rain (Which will not inspire as many popular songs as chocolate rain, I’m sure. Partly because we’ll all be dead.) will fall in much smaller drops than ordinary rain. We also know this because mercury is so much denser than water (it’s so dense almost every other substance floats on it, including lead, granite, and iron). This density means that the mercury raindrops would be heavy enough to fall from their clouds at a smaller size than water raindrops.
The average water raindrop has a radius of about 1 mm, and therefore weighs about 4.2 grams. A 4.2-gram mercury drop has a radius of 420 microns, so it’s about the size of a poppy seed (See? Useful! Why don’t we measure everything in food units?). The terminal velocity of a water droplet with a radius of 1 millimeter is about 6.6 meters per second or 15 miles per hour. The terminal velocity of our mercury drop is 15.7 meters per second or 35 miles per hour. The impact of each mercury drop would be like being hit by a bug while riding a motorcycle at moderate speeds, which would be annoying, but probably not painful.
“But Hobo,” I hear you ask, “isn’t mercury deadly poison?” Well, yes. But elemental mercury, the kind that forms pretty shiny droplets, is one of the less poisonous forms. I’m not saying it’s good to have around: it gives off vapor which, when breathed, can poison you, make you go insane, and inspire an Alice in Wonderland character. But as long as it’s on the outside of your body, mercury isn’t instantly lethal. Just take a few showers after the mercury rain and you’ll be okay.
If you get elemental mercury inside you, however, you’re in big trouble, as in the tragic case of a woman who injected liquid mercury directly into her arm in 1967, in what I can’t help but think must have been a suicide attempt. A few days after the injection, they X-rayed her lungs and saw droplets of mercury in the blood vessels. She developed a fever of 107 Fahrenheit (41.8 Celsius) and died 31 days after the injection.
But unless you’re breathing or swallowing or otherwise consuming it, it’s not metallic mercury you should be worried about. It’s organic mercury–mercury that’s joined up with carbon atoms. Infamously, methyl-mercury (which consists of a carbon atom stuck to a mercury atom, paired with a negative ion like chloride) tends to accumulate in the most delicious kinds of fish (like tuna), which is a real shame.
But methyl-mercury is nothing. Methyl-mercury may lead to brain damage and environmental pollution, and that’s tragic, but for sheer shock value, nothing surpasses dimethylmercury. In a famous (and again, really sad) case in 1997 (which is just as scary in this emotionally-neutral medical report as it was in the news), an experienced chemist was transferring dimethylmercury from a vial into a test tube. Her area of expertise was the chemistry of heavy metals, so she had a reason to be messing with this stuff, and she knew what she was doing. But she accidentally spilled a few drops of the stuff on her hand. Being safety-conscious, she removed her latex glove and presumably washed her hands and went back to work.
For five months, it seemed there was nothing wrong. Then, suddenly, she started losing her balance and slurring her words. She went to the hospital. Over the course of a month, in spite of really, really aggressive treatment, she lost feeling in her feet and hands, lost her hearing and vision, and fell into a vegetative state, and was eventually taken off life support, per her wishes. On autopsy, her brain’s entire cortex was atrophied and scarred. Her cerebellum, which controls balance and coordination and other functions, was almost completely destroyed.
I would like to remind you that all this happened because she spilled two or three fucking drops of dimethylmercury on her hand which was protected by a latex glove. Didn’t matter. Dimethylmercury is just that nasty.
Luckily, the scientific community has said what we all want to say right about now, which is “Go fuck yourself, dimethylmercury.” There was a time when people used it to calibrate nuclear magnetic resonance machines, but even the NMR people, who spend their days dealing with magnetic fields that can turn paperclips into deadly missiles, have given dimethylmercury a big middle finger. And good for them. That’s some nasty shit.
Standard