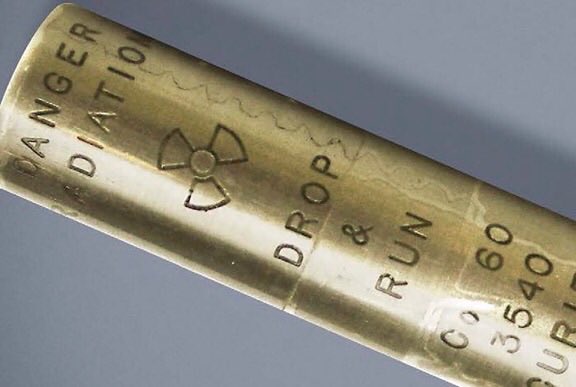 Radiation therapy is a lifesaver, because, unfortunately, cancer still exists. And sometimes cancers grow in places doctors can’t reach without poking a hole in something important. (The brain and pancreas are good examples. Don’t poke holes in those.) Luckily, instead of going after the cancer with pointy sharp things, a doctor can instead shoot the tumor with a radiation gun. (It’s weird that that counts as lucky, but it does.) If the radiation beam is swiveled properly, rest of the body only gets the beam swept over it briefly. The tumor, on the other hand, at the center of the beam’s pivot, gets the radiation constantly, and it gets radiation poisoning and dies, sparing the healthy tissue around it.

All good so far. But how the hell do you build a radiation gun? Most modern clinics use x-ray beams. A lot are starting to adopt proton beams, which don’t do as much collateral damage, if you plan things right. A few specialist clinics use beams of neutrons or carbon ions. And some clinics use gamma rays. Gamma rays aren’t exactly easy to make, but some radioactive isotopes produce them when they decay. Cobalt-60 is one of those isotopes. Stick a little slug of cobalt-60 in a tube inside a big lead block, at the far end of a narrow hole. The lead stops most of the gamma rays. The hole lets the rest out as a narrow beam. Done! Gamma-ray gun! Cool, eh?

Understandably, the security around these little cobalt death-pellets is pretty tight. But people make mistakes. Sometimes, radioactive sources get stolen. Or they go missing. Or a nation goes through a revolution or a civil war, and the authorities who’re supposed to keep track of the death-pellets get swallowed in a coup. Or the sources simply get left behind when their clinics close. That’s what happened in 1987 in Goiânia, Brazil: A scrapper broke into an abandoned radiotherapy clinic, stole a cesium-137 gamma-ray source without knowing what it was, and took it home. Eventually, somebody broke the source capsule open with a screwdriver and got lethal cesium-137 chloride powder everywhere. People handled it. People touched it and then ate. People slept in beds right next to the source capsule. Four people died, 249 people got exposed, and a whole fucking village had to be decontaminated. Gamma-therapy sources are not to be trifled with.

So, if for some reason you’re breaking into radiotherapy clinics (please don’t do that) and you come across an ominous steel capsule that says “Drop and Run” on it, then for the love of everything holy, drop it and run. 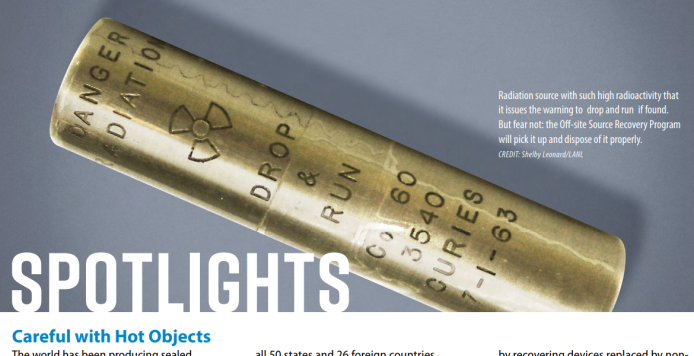 (You thought I was kidding about the “Drop and Run” thing, didn’t you? I wasn’t. 3500 Curies of cobalt-60 is enough that, if you put that source capsule it in your pants pocket, you’d drop dead in fifteen minutes flat. We’re not even talking about a “slow, miserable, rot-from-the-inside death from radiation poisoning” kind of dead. We’re talking “dead this time tomorrow” dead. Source: this online calculator, assuming 3,500 Curies of Co-60 at an average distance of 1.5 meters, and a rapid-death dose of 30 Sieverts, which, for gamma rays, equals 30 Gray.)