Unfortunately, that art is Hieronymous Bosch’s The Garden of Earthly Delights, which is an even worse fever-dream. I should warn you, this post is probably not safe for work, for children, or for those who dislike nudity and (very mild) gore. It’s also not suitable for anyone who can’t pass a DC 25 sanity check. Just so you know.

Here’s the painting in its entirety. It’s a classic, probably painted sometime around 1500: 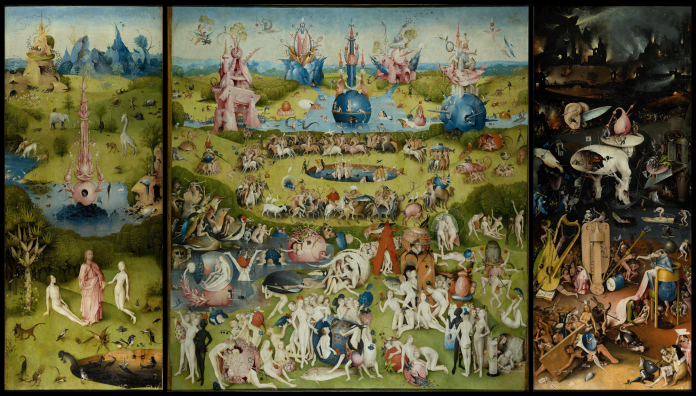 It’s pretty typical of the symbolic religious art of the time. It’s also stuffed full of fucking nightmare fuel. I know it’s kinda hard to see from that image above, but fret not! I found a high-resolution scan of the painting so that I could carve up the nightmare fuel into little morsels and present them to you, the dear reader, one-by-one.

I’m not exactly a talented art-appreciator. I’m the kinda guy who looks at a Jackson Pollock painting and thinks “Nope. Don’t get it. Looks like an accident. Maybe spaghetti.” So I haven’t divided the little fragments of The Garden by theme or symbolism. I’ve divided them into four broad categories: The Bestiary, for horrible creatures; Architecture, for horrible buildings; People Doing Weird Things, which explains itself; and Nightmare Fuel, for horrible things which defy categorization. Let’s get started! But before we do, let me show you what Jesus Christ thinks about this whole situation.

If you study this painting for a while (which I don’t recommend, honestly: when I did it, I started to feel like spiders were crawling up my back) you’ll notice that Bosch really likes his weird animals. One of the more common ones is a frightful creature I call the Beak-Bird:

Here, we see the Beak-Birds’ high priest scolding a blue Emperor Palpatine from Star Wars, probably because Palpatine is sitting on his favorite chair.

Most Beak-Birds, though, spend their days at more ordinary tasks. Such as ice-skating with longbows whilst having no arms and having arrows jammed in their ankles.

There’s something quite ominous about Beak-Birds, but they’re not nearly as bad as The Frogeater. 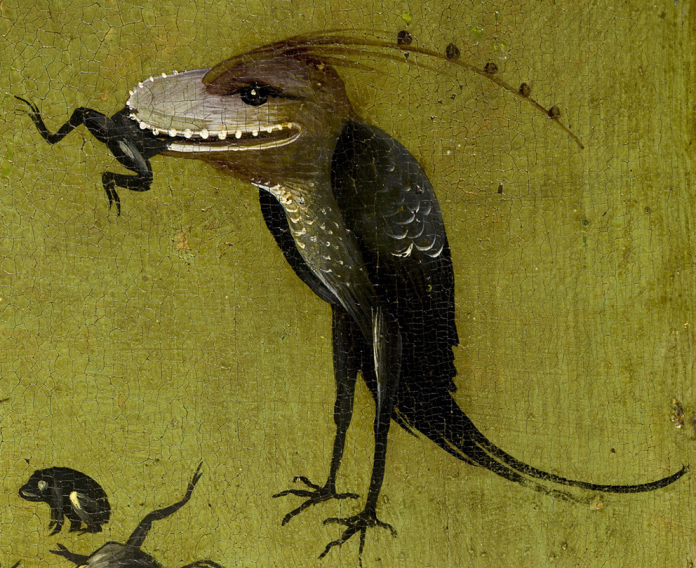 The worst part? The Frogeater is in the far-left panel, which I think is supposed to be the Garden of Eden. Apparently, in Hieronymous Bosch’s cosmology, everywhere is Hell. Don’t believe me? The Garden of Eden also has this…thing:

That’s kinda scary. But hey, if I saw one of those in the park, I probably wouldn’t run away. I’d save my screaming madness for things like this weasel with supersonic vomit:

It also seems that Bosch was some sort of psychic, because even though paleontology wasn’t a thing in 1500, he saw back in time a quarter-million years to glimpse the nightmare that was precambrian life: 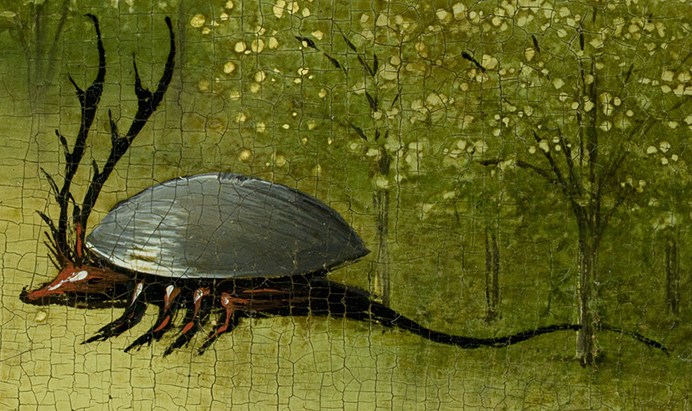 I feel like if you found a fossil of one of those things, you’d be drawn into some sort of trans-dimensional Lovecraftian madness and end up stuck in a nightmare town with creepy turtleneck-wearing Jürgen Prochnow. And then there are these things, which I’m pretty sure is what would happen if Farthing Wood was downwind of Chernobyl.

But not all of the inhabitants of the Garden of Earthly Delights are horrible monstrosities (yes they are). Some of them are friendly, well-read platypus fish-folk: 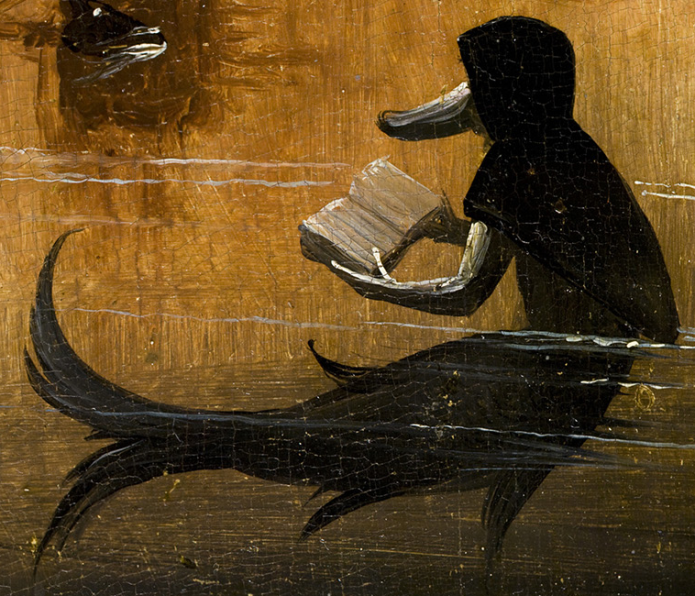 Nice to see that the residents of Innsmouth weren’t all as bad as the ones in that story. Hell, some of our fish-people are downright jovial!

These horrible dolphin-mermaid-mannequin things even have parades! They must get along with the Garden’s other residents, because, like everybody else, they spend their days playing with weird fruit. 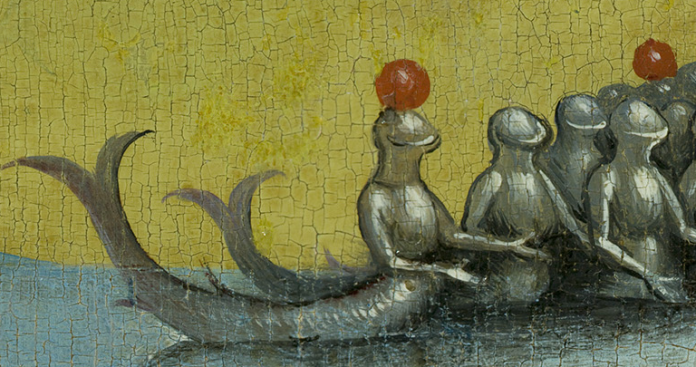 Like I said, sanity levels are very low all throughout this painting. I think there must be something in the water. And the air. And the fabric of reality. Whatever it is, it’s twisted the pour souls who live in the Garden into delirious freaks.

These fine folks have decided to spend their Sunday forming a human centipede to prop up a mermaid. And apparently, anuses are an ideal crow attractant.

These people have decided to take a break from the weirdness by worshiping an enormous alpine strawberry. Although some of them appear to be those creepy faceless flesh-things from Pink Floyd’s weird-ass movie The Wall.

Equestrianism is also popular in the Garden. Well, it’s not really equestrianism, because that’s not a horse. I have no fucking idea what that is. (Which is pretty much the theme of the painting.)

I don’t even know why he’s riding bare-back, since the Garden has much more civilized and exciting forms of transportation:

But, of course, the buffet of earthly delights wouldn’t be complete without a little hanky-panky:

…so here’s a jaunty African gentleman romancing a blow-up doll while he lets his friend drown.

…and here’s an over-enthusiastic lady (I think) busy chatting up a man (I think) with a blueberry for a head (I think).

I’ll be honest: I’m not sure what’s going on here. A man trying to mate with a shrimp that’s swallowed three blue-assed…actually, no, I don’t want to know. 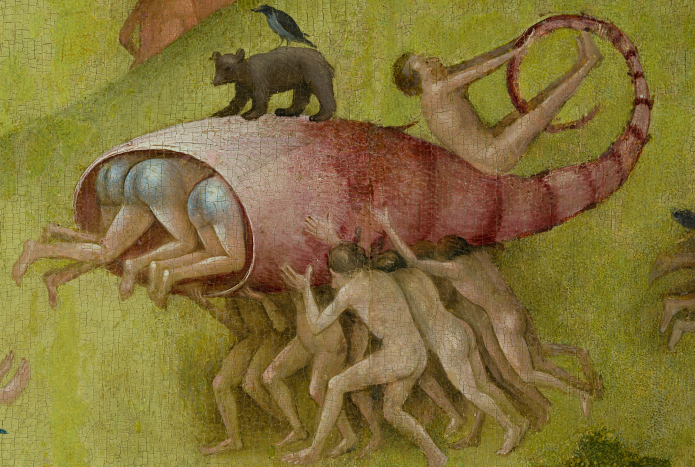 I wish these people would stop doing…whatever it is they’re doing. I feel kinda dirty for watching it. 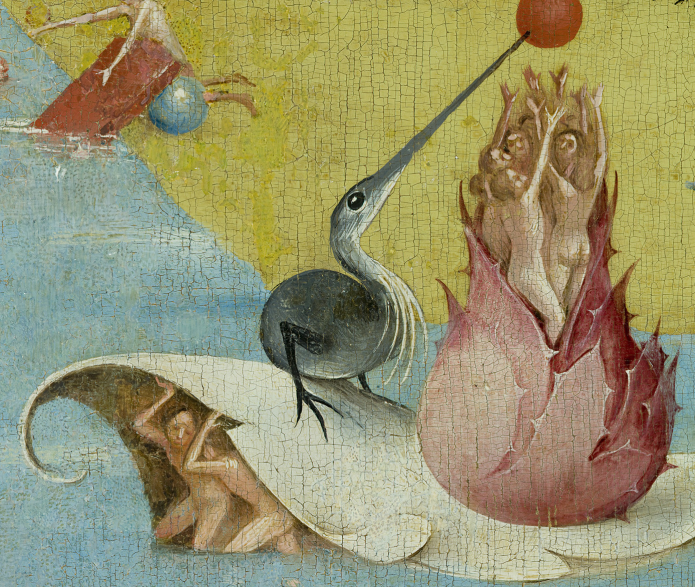 But even though they’re nightmares from the underbelly of reality, the denizens of the Garden are not immune to the effects of over-indulgence. But they are pretty happy when hung-over.

Not all the residents of the Garden are happy living there, though. Some of them, in fact, are making the same face I made while I was studying this painting:

The humans and the mannequin-fish-people all enjoy the Veiny Glassy Flesh-Fortress. I feel like if you went to the doctor with a tumor shaped like that, he’d just shoot you in the head and burn your body without asking questions.

I wanted to call this a bird-bath, but it’s quite obviously the prickly, bulbous, fleshy penis of a horrible slithery creature that lives at the bottom of the sea. In Hell. That owl’s making the same face as me. 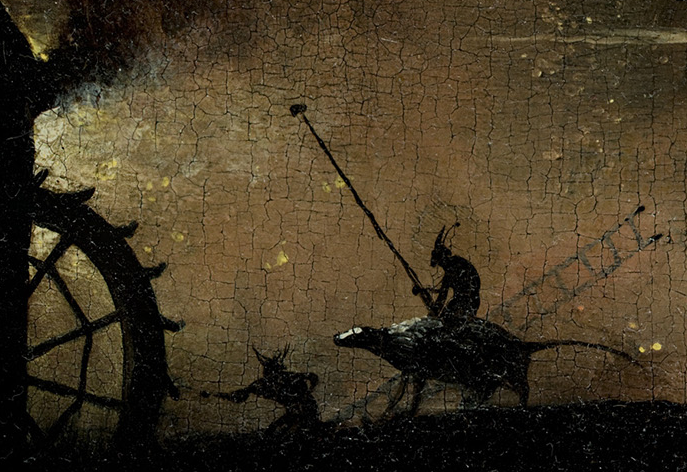 While the Garden of Earthly Delights Municipal Grain Mill does offer free guided tours, I’d advise against visiting. You don’t wanna know what they do with that cat-skull-on-a-stick. And don’t even get me started on the ladder…

But, for those of you who think that water-wheels of death are a little too pedestrian and boring for today’s overstimulated world, there’s always…

This is how you play the clarinet in Hell: 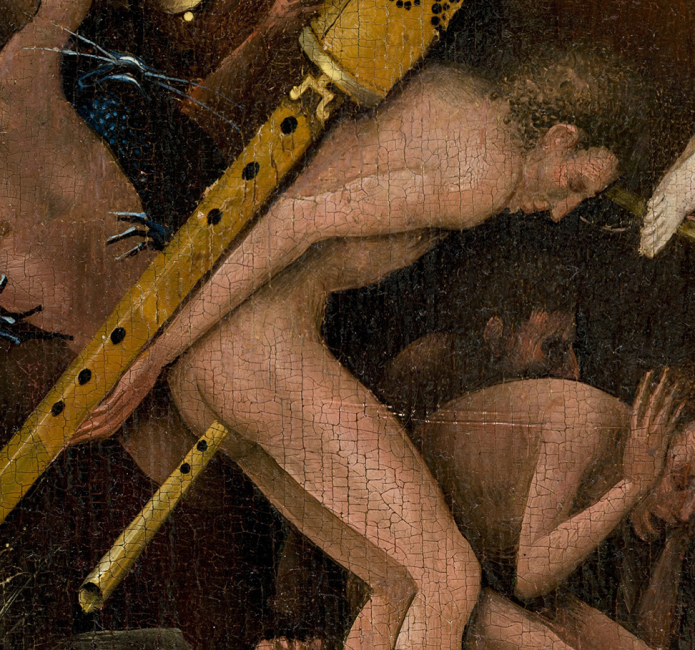 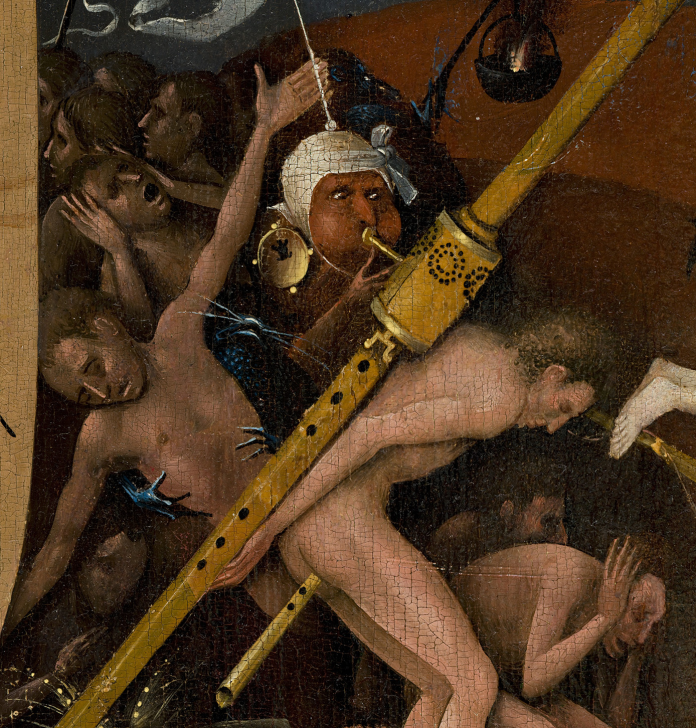 …and they’re all having more fun than this lady, who is about to have at least thirty-seven sins inflicted upon her.

But not to worry! Hell has parades, for when your eternity of indescribable torment gets you down.

(Please note: the parade will probably not make you feel better about anything.)

…which is the same predatory strategy employed by the Horrible Rat-Monkey.

Yes, brown-haired man, I feel the same way right about now. But at least you’re better off than this guy, who’s being slaughtered by a…piranha with butterfly wings for ears? Look, your guess is as good as mine. 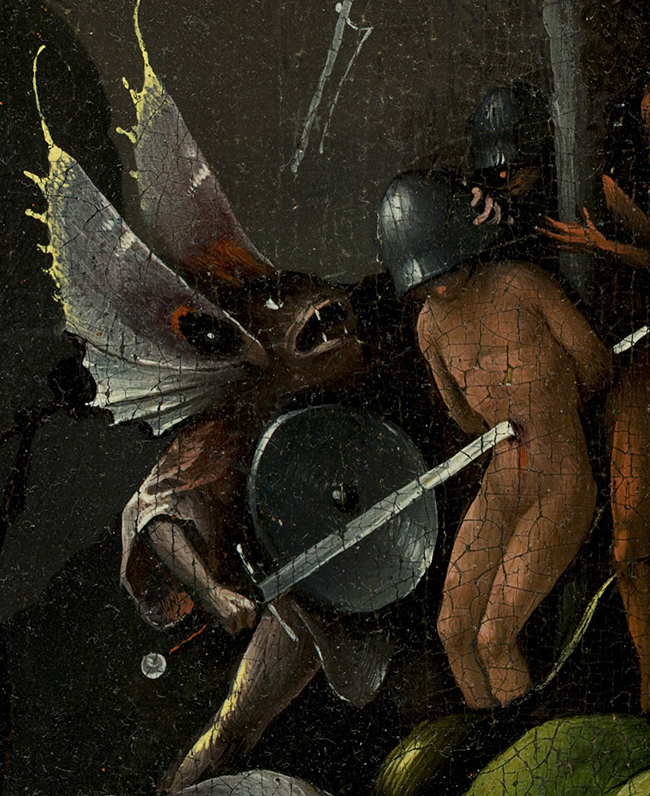 But it’s not all bad down here in Perdition. At least the demons get to have a good time!

I mean, I assume that that blue frog-bird is enjoying itself. After all, it’s pooping blueberry Jell-O. And it has vases for shoes. And a kettle on its head. And it’s eating a dude. Who has birds exploding out of his asshole. I mean, I assume that’s the kind of thing demons enjoy.

They also enjoy dressing up as frog astronauts and fondling women with creepy tendril-hands. While jackalopes grope said women.

Luckily, humans do occasionally get in on the demonic lovin’. Well “luckily” probably isn’t the right word… 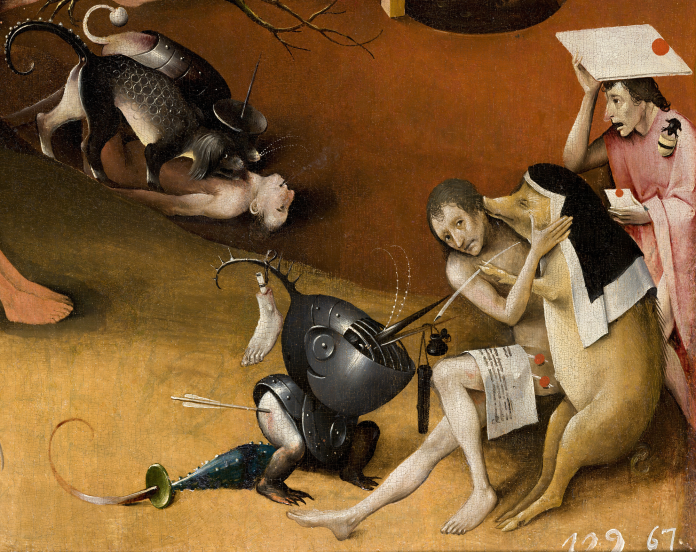 Who would your rather be? The guy getting kissed by the pig-nun while the creepy knight-frog-bird watches, or the guy having sex with whatever that armored jumble of animal parts is? Personally, I’d rather be the horrified guy with the frog in his pocket and the letter on his head.

Don’t look so down, placid curly-haired guy. You may be getting humped by a satellite-dish-wearing murder-rat wearing horrible soccer cleats, but at least you didn’t fall prey to the exploded-faced rat-cat drummer:

I think I know why none of these people seem all that horrified about what’s happening to them in Hell. It’s because Earth was just as fucking horrifying:

You see, when a daddy demon loves a mommy Hindu death-goddess very much, they get together and rub their horrible cloacas against each other for a while, and then this thing comes out and eats your soul…

…and after ten generations of incestuous inbreeding, you get these upside-down flower-bud…egg…things…

To be honest, doesn’t Hell seem kinda inviting after all that?

I mean, it’s a smoldering charcoal wasteland, but as we’ve already seen, there’s much worse going on elsewhere. It’s not such a bad place.

Well, except for Creepy Uncle Hieronymous watching you all the time. 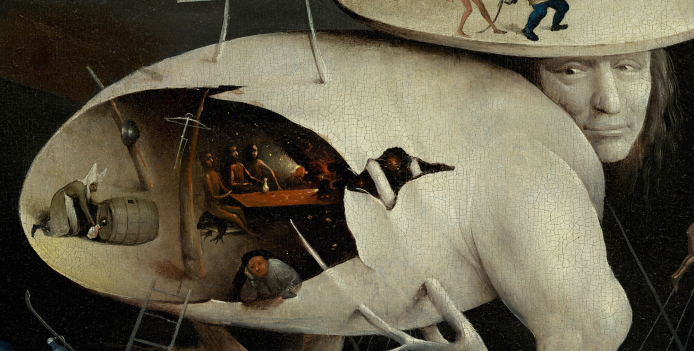 …with his porcelain-white skin and his exploded, demon-filled egg-ass.

You know, I used to think you were the creepiest thing from the middle ages, Plague Doctor, but you might as well just go home. Everybody else here has you beat.

…even this friendly bird.